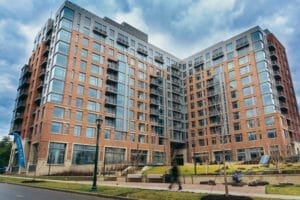 The Lindley, a new luxury, mixed-income multifamily building in Chevy Chase, MD, is the result of a unique public-private partnership between the Housing Opportunities Commission of Montgomery County, EYA LLC, and The Morris and Gwendolyn Cafritz Foundation. The property was funded without tax credits or direct subsidies, and is one of the first buildings of its kind to include private equity as a major funding source while remaining under the principal control of a public housing authority. It is exemplary of building affordable units in a high-opportunity area near a future public transit hub with best-in-class amenities.

Chevy Chase, MD, is a highly sought-after, established community with top-performing public schools, high incomes, and convenient access to parks, trails and public transit. The Lindley was designed to capitalize on the community’s assets, increasing affordable housing in a prime Washington metropolitan neighborhood.

The site previously consisted of 68 low-rise garden apartments in five aging buildings owned by HOC and rented at affordable levels. Looking to improve and expand the supply of affordable units and create a sustainable affordable housing model, HOC entered into a partnership with EYA and the Cafritz Foundation to redevelop the 5-acre site into a thriving mixed-income neighborhood. The Lindley was designed to create density near transit. A new grocery store and additional development are planned adjacent to The Lindley, which will support a lively, transit-oriented community.

The site includes 52 high-end for-sale townhomes, ten Moderately Priced Dwelling Units (MPDU), a brand new half-acre public park, and a new private street. The building features best-in-class amenities. These include a rooftop, high-end fitness center, and a family arcade with video games, pool tables, and a children’s play room. The entire building is built around the new Jean Banks Park with a granite slide and water features atop the below-grade garage.

The project is currently targeting LEED Silver certification with the U.S. Green Building Council. The building’s concrete structure and interior metal stud partitions use recycled and local materials. Bioswale planters around the perimeter of the building capture water from the roof, and green roofs and stormwater retention planters mitigate stormwater impacts.

Ultimately, The Lindley furthers HOC’s goal of connecting low- and moderate-income households to employment, education, and transit in high opportunity neighborhoods, and can serve as a model for future public-private partnerships to develop affordable and mixed-income housing as traditional government resources for affordable housing diminish.